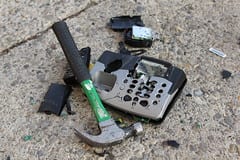 Well, we’ve found the ringleaders in this little impromptu telecommunications insurrection and took them out back, where we switched from our standard ‘beat with a metaphorical hammer’ to ‘beat with an real hammer’. Which worked so well, actually, that our phones are now back up and behaving themselves. We can now take calls without any problems. Those poor phones thought that they could beat us… WHO’S TALKING NOW, HUH? Here’s a hint: we are.