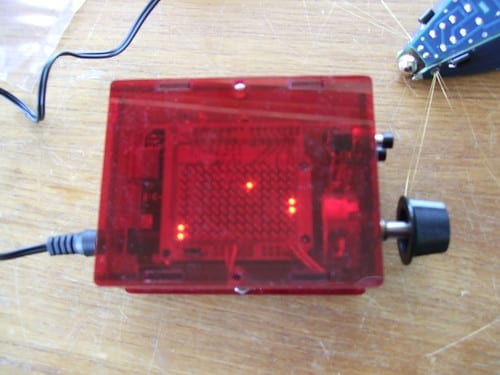 Have we all had our fill of Maple syrup and/or fireworks? With Canada Day and Independence Day behind us, we can get on with our regularly scheduled “look at all the new stuff we’ve brought in” programming. Truth be told, today is actually the start of the Calgary Stampede. Apparently, that’s a pretty big deal in this town, but luckily for you this writer/newsposter-guy doesn’t own a cowboy hat, and is therefore immune to the Stampede’s allure. It’s kinda like a reverse tin-foil hat, where you’re fine without it on, but as soon as you wear it, all the Cowboy brainwaves get directly channeled into your mind. Anyways, on with the show. We do have some new products, but first, check this action out:

We met Mike at the Vancouver Maker Faire, where he was a volunteer for the event. He recently sent us the above photo to show us what he was working on: A playable Pong game using an Arduino and LoL Shield setup within a SAFE. Well, we only received this one image, so we assume it’s actually animated/moving (if you close your eyes, it’s pretty easy to imagine that single pixel bouncing back and forth). Anyways, what’s really neat is that in order to make it playable, he tweaked the setup to include two buttons and a beefy trimpot for controls. Apparently it even plays Invaders. We’re pretty impressed – thanks for sending it in, Mike! If anyone else has a cool project that want to show off, please let us know. We love seeing what all y’all are workin’ on (Oh no! Cowboy fever is creeping its way into my vocabulary!).

“That thing uses a LoL Shield? What the heck is that?!”. It’s an internet meme generator for your Arduino – simply hook it up, and Twitterfy what shows up to create an instant online sensation! Actually, it has little-to-nothing to do with any of that stuff. Instead, it’s actually one of our “new”  items (and by that we mean “it was released semi-recently, and we’ve neglected to announce it on our home page up until now”) that has found its way into our inventory. Keep reading about it and a hand full of other awesome products below:

…aaaaand that’s it for this week. Take care everyone!